Recipes, reviews, foodie finds, and making time for family and myself

If you’ve ever had a meal that was so perfect it’s almost impossible to describe and feel you’re doing it justice, then you will understand how much I loved the food at Russell’s Restaurant in the delightful Cotswold town of Broadway. My husband James and I have dined at Russell’s twice now (both times for my birthday, lucky lady) and both times have been so impressive. The second time however, which is what this review is based on, was out of this world. 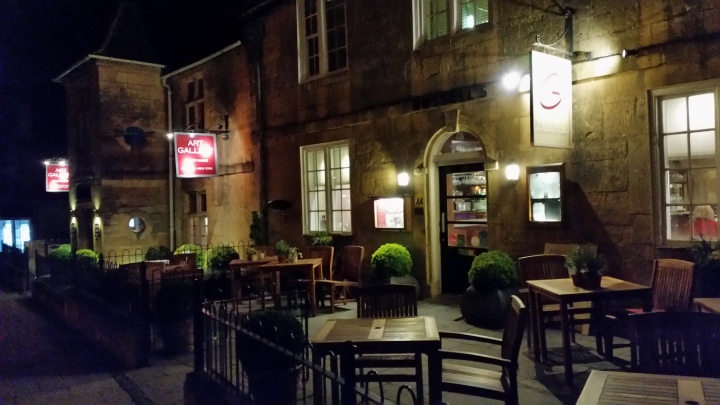 Having expressed the difficulty of describing the incredible food at Russell’s I’m going to give it a go. Otherwise this wouldn’t be a very interesting review, would it? :o)

We visited on a busy Saturday night a few months ago but were greeted and seated quickly at a lovely table by the window. We perused the menu with a tipple, I had a crisp white wine while my husband James enjoyed a G&T. They serve a range of locally produced spirits including 6’o’Clock gin, which was great to see as I had recently discovered the brand at the Farm Shop and Deli Show.

The menu was inventive yet didn’t stray into being pretentious or overly fussy. After great deliberation I opted for quail starter with Lighthorne lamb for main, while James chose hand-dived scallops followed by Serrano wrapped pork tenderloin.

The starters arrived quickly and were beautifully presented. I haven’t had quail for such a long time, and after this fantastic starter I can’t believe what I’ve been missing out on. I loved that there were three different elements to the dish; pan roasted breast, confit leg and fois gras mousse, all served with poached rhubarb. It was such a pleasure to discover these different ways of preparing and cooking quail, I felt that I was on quite the journey of food exploration.

James’ scallops were cooked to perfection and were complimented by their accompaniments including a shellfish foam. 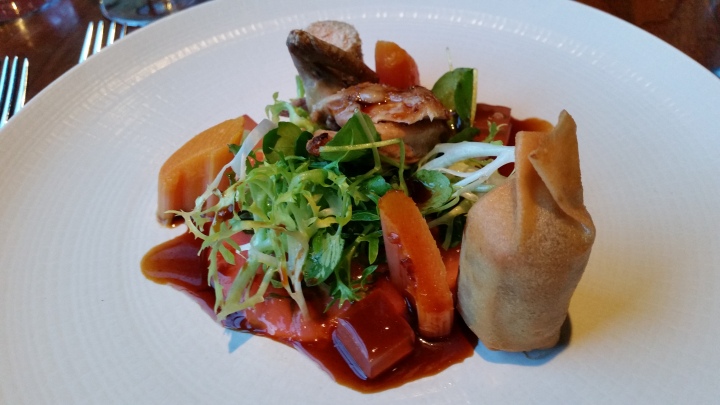 James’ main course offered a similar experience to my starter, with the tenderloin being the star of the show but other pork variants to try. This included a sausage roll – yes a sausage roll! But don’t misunderstand, this was not your average sausage roll that you find in the supermarket. James reported it was flavourful, rich and most likely the best sausage roll in the world.

Over on my plate, my lamb was heavenly. It was beautifully cooked and still pink, which is just how I like it. I can’t recall everything it came with, but the flavours and tastes all worked together in perfect harmony.

We were too full to really justify dessert, but we pushed ourselves anyway. I tucked into a light and airy passion fruit soufflé, which I found sweet but not sickly. I often opt for cheese when we dine out, but I’m so pleased I chose the soufflé. The texture of the passion fruit combined with the fluffy soufflé was divine.

James had something unbelievably chocolately, I think it was a ganache. As a bit of a chocolate fiend he was in heaven, but I think for me it would have been too rich. 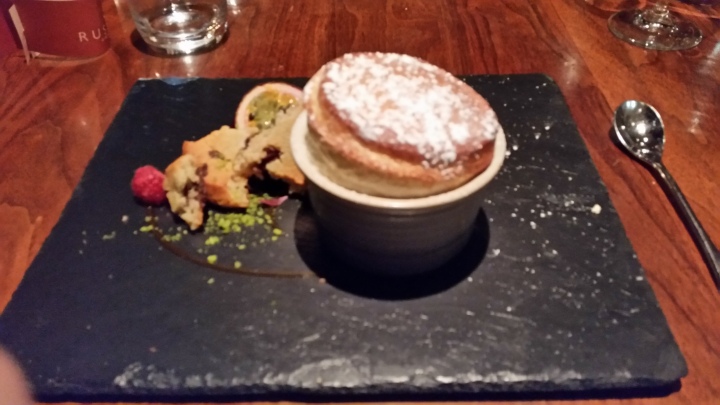 As well as the outstanding food, the service was attentive, the ambience was delightful and the wine list offers something for everyone.

The overall bill was above £100, but I felt this was more than justifiable for the quality of the food and the exceptional dining experience offered by Russell’s. So it’s certainly one of the more expensive places to eat in the Cotswolds, but for a special occasion or when you feel like splashing out, it would be my first choice every time.

Have you had the pleasure of dining at Russell’s?

We paid in full for our meal and the restaurant were unaware that I was planning to write this review. The food truly is amazing so I urge you to visit if you haven’t already.

The beauty of Ohelo reusable bottles and tumblers

What to do in Birmingham for under £60